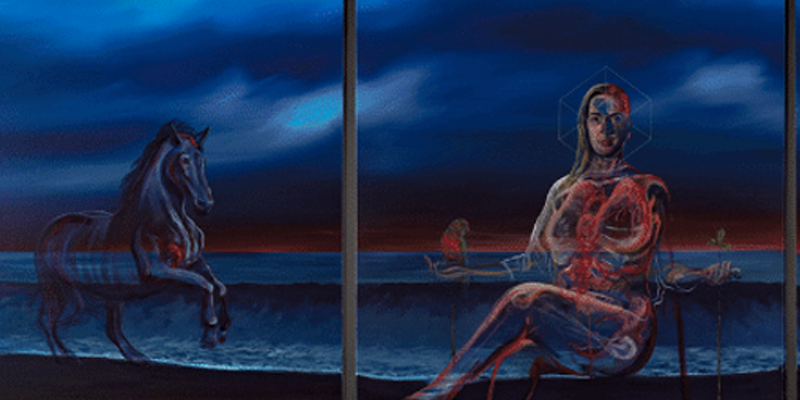 A portrait of healthcare campaigner Vicky Phelan has raised just over €58,000 at auction today.

The piece was commissioned by the charity Heroes Aid and all proceeds are going to frontline healthcare workers to assist them during the current pandemic.

The portrait measuring 300cm by 150cm was painted by Tullamore-based artist Vincent Devine.

He said the painting took months to complete and involved bringing Ms Phelan to the beach in Doonbeg in Co Clare to compose the image.

The painting depicts various aspects of her s life from the past to the present and the future.

Mr Devine said: “I have tried to covey the tragedies and the joys in her life, all symbolically through the anatomy of her body and in different objects as well.”

Ms Phelan is currently undergoing treatment in the US.

The auction was held this afternoon at Sheppard’s Irish Auction House in Durrow, Co Laois.

In advance of the bidding opening, auctioneer Michael Sheppard said that the “symbolism used in the painting will be of historic reference for decades to come”.

Auctioneer Philip Sheppard said that they were amazed and stunned at the level of interest and the final price achieved for the painting.

He said that the final price including fees is just over €58,000, adding that all proceeds, including the auction fees, will be donated to Heroes Aid charity.

The founder of Heroes Aid, Mary Leahy said that they were thrilled with the “incredible” price achieved by the portrait.

She said: “It’s an incredible amount of money and will benefit frontline healthcare workers in this very testing time.”

The purchaser of the portrait is Mooncoin-based businessman David Brennan. He is a family friend of Ms Phelan and he said that he will bring the piece home to Mooncoin where it will go on public display.

Heroes Aid selected as charity partner for ITCSU Raise And Give Week 2021…
February 17, 2021